Whatsapp announced on Tuesday that they are making significant changes to the User Privacy controls. The highlights of these updates include: Hiding Online Status, Leaving Whatsapp Groups silently without having the other members notified, allowing users to delete messages as late as after 2 days, and blocking screenshot access to ‘View Once’ Media.

You can currently hide your online status on WhatsApp. The firm now allows you to hide your “Online” indicator, whereas previously users could only hide their “Last Seen” status. The ‘Online’ status indicator on WhatsApp can now be shared with anybody the user chooses. The last saw online status can be totally hidden from everyone, just unidentified numbers, certain contacts, or nobody. Under the last seen settings, the feature will include a new “Who can see when I’m online” option with the choices “Everyone” and “Same as Last Seen.” 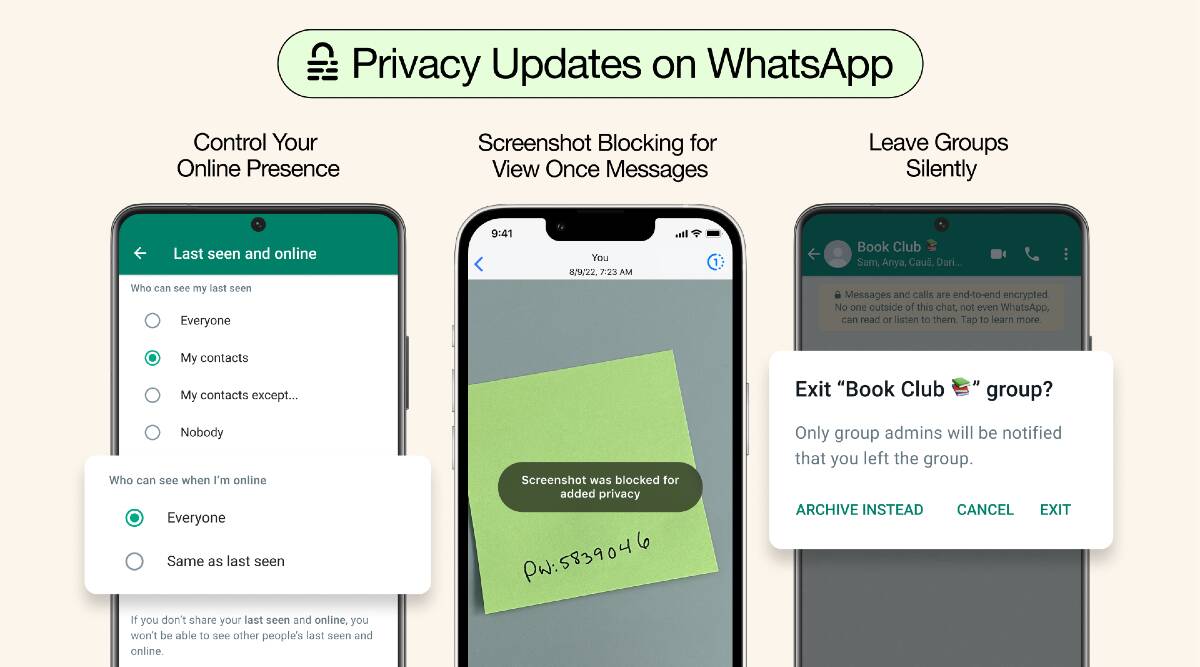 You don’t want your bothersome relatives and their endless WhatsApp forwards, but you can’t leave the group out of respect. You’re covered, says Mark Zuckerberg. In the most recent version of WhatsApp, you can now discreetly leave these groups without letting anyone know. The process is essentially the same, with the exception that the chat does not display an exit notification.

Furthermore, screenshots for ‘View Once Messages’ will no longer be allowed in the instant messaging app. It was mentioned that “View Once” is already a very well-liked method of sharing images or other types of data that don’t require a permanent digital record. “As an additional layer of security, WhatsApp is now enabling screenshot blocking for View Once messages. Users will soon be able to use this functionality, which is now undergoing testing.

The business went on to say that the launch of these new capabilities is supported by a recent WhatsApp privacy survey, which indicated that 72% of people appreciate the ability to talk honestly and unfiltered, but that more than 47% can only do this in a safe, private setting. No other large-scale global messaging platform, according to Ms Vora, offers the same level of protection for user messages, media, voice messages, video calls, and chat backups. “In our opinion, WhatsApp is the safest platform for private conversations. We’re also initiating a global campaign to inform people about how we strive to protect their private chats on WhatsApp to spread the news about these new capabilities, starting with the UK and India, she added.